END_OF_DOCUMENT_TOKEN_TO_BE_REPLACED

ProTip: What's Vital to Your Work May Not Be What You'd Expect 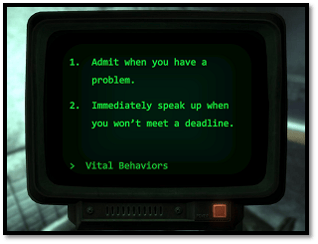 Let's say you work as a manager in a software development firm where dozens of software engineers write mountains of code every week.  The products are so complex that the overall design is divided among several teams.  After years of your employees bringing in projects late or riddled with bugs, you discover that the key to consistent high-quality performance is getting them to practice two vital behaviors: (1) admit when they have problems, and (2) immediately speak up when they won't meet a deadline.  When your software designers do these two things consistently, products get completed correctly and on time.  When they don't, they don't.

END_OF_DOCUMENT_TOKEN_TO_BE_REPLACED

ProTip: Watching Out for the Risk Iceberg 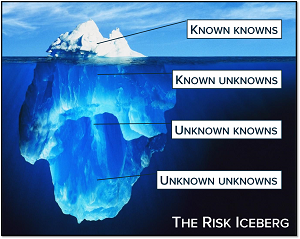 Law Number XLV: One should expect that the expected can be prevented, but the unexpected should have been expected.

There are tons of aphorisms surrounding this topic: "expect the unexpected" is a particularly common one.  Or if you've come in contact with any of NASA's safety discussions (or heard it from Donald Rumsfeld), you know about the "unknown unknowns."  What this all boils down to is that risk presents itself to us in the form of what we know versus what we don't, what we expect and what we don't.

END_OF_DOCUMENT_TOKEN_TO_BE_REPLACED

ProTip: You Know What They Say About Assumptions 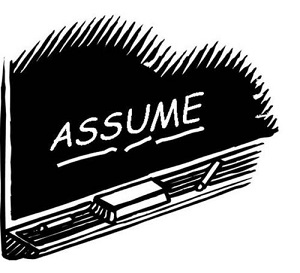 Don't assume anything.  Just because something worked before doesn't mean it's working now.  You can't rely on what once was.  You have to deal with the here and now.

- Tabatha Coffey, Own It!

We all know what everyone says about assumptions (or, at least, I assume we do). And yet we still find ourselves in disbelief when a common procedure suddenly fails on us.  Even worse, we often don't realize it has failed because we are assuming that something that has worked that long will surely follow its own inertia and work forever.  How very wrong we are.

END_OF_DOCUMENT_TOKEN_TO_BE_REPLACED

ProTip: You Look, but You Don't See

I'll never forget walking through a major hotel with the vice president of product development for Hyatt International, Frank C. Ansel III.  The food and beverage director of the hotel knew we were coming, so he had spruced up the place.  Everything at the hotel looked amazing to me, but twenty minutes into the walkthrough, Frank looked at his manager with obvious displeasure.  I asked Frank why he was upset.  "You think he's doing things well because you look but you don't see," Frank said.  He pulled me over to a table and pointed out that the service plates weren't all turned the same way, nor was the flatware placed consistently at each setting.  Frank nodded toward a waiter who was pouring out of the side of a pitcher instead of the spout -- a real no-no in table service.  These are subtle things, but they demonstrated a lack of standards and attention to detail.  When "little" things are off, it means more important standards are probably lacking.  That line, "you look but you don't see," has stayed with me ever since.

END_OF_DOCUMENT_TOKEN_TO_BE_REPLACED

ProTip: You Don't Need a Crystal Ball to Anticipate the Future

Part of looking ahead as a service provider is asking a simple but compelling question:  What is happening that will affect my service business in the next year?  From the information you collect in answer to this question, you can make assumptions that will help you anticipate the short-term future.  The question should be asked about the following outside influences: the status of the local or national economy, a threatened strike in a related industry, the inflation rate, the status of major competitors, the economic well-being of a major industry or your client in that industry, a major technological innovation that may be either expected or unexpected.

END_OF_DOCUMENT_TOKEN_TO_BE_REPLACED

Next
Tips and resources on how to be a master of customer service and sales; to improve yourself personally, as an employee, and as a leader; and much more.